The vocation of this noble soul, Bl. Mother Mary of the Divine Heart (d. 1899), was simple: she was, in imitation of Our Lord, to offer herself as a host for the glory of God and the salvation of souls. “Why”, Our Lord would say to her (I am paraphrasing different parts of her writings), “do you not leave the path of fear? Why will you not follow the path of love, which is shorter and easier?… It is My Will to be all for you… Your heart is an altar upon which everything must be consumed by Divine Love.” (As an aside, it is worth noting that St. Marie of the Incarnation, mentioned above, was never led by the path of fear; rather, she made giant strides along the path of Love).

Let me repeat those final words: “Your heart is an altar upon which everything must be consumed by Divine Love.” Are these words directed to a privileged few? Absolutely not. This is the sublime vocation of all souls, and it is to this that we must all aspire with all our being. We must, in a word, offer to God that sacrifice most pleasing to Him, without which all our other sacrifices are a mere farce. And what sacrifice is this? The sacrifice of our will.

It is only when God – Who is spirit (Jn. 4:24) – possess our wills, that can He act freely, thereby glorifying Himself in us: ‘For obedience is better than sacrifices: and to hearken rather than to offer the fat of rams’ (1 Kg. 15:22). Obedience, the Saints tell us, pleases God more than great sacrifices “because obedience has no self-will” (Our Lord to St. Bridget of Sweden).

The next time you are tempted to murmur, remember that Jesus is offering Himself to the Father upon the Altars of our churches for your salvation; your vocation is to unite yourself, as did Mother Adele Garnier* (d. 1924), to this mystical immolation of Christ on the Altar of your heart; “by Him,” writes Dom Gueranger, “the Holy Ghost, Who sacred Fount He is (cf. Jn. 4:14; 7:37, 39), pours Himself out upon man, whereby to adapt him to his sublime vocation, and to consummate, in infinite love (which is Himself), that union of every creature with the divine Word.”

Concretely, you can unite yourself to Christ by receiving Him in Holy Communion, giving Him the key of your will. Always remember that this is the ‘one oblation’ by which ‘He hath perfected for ever them that are sanctified’ (Heb. 10:14). There is no greater aid to holiness. Pray to Our Lady of the Blessed Sacrament and you will see that this is true. 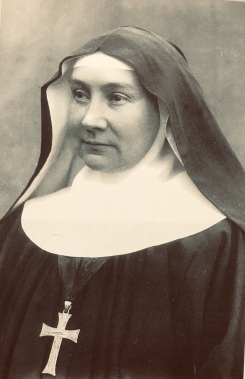 ‘But this, for that He continueth for ever, hath an everlasting priesthood, whereby He is able also to save for ever them that come to God by Him, always living to make intercession for us.’ (Heb. 7:24-25)

“Thus the sovereign pontificate is eternal, and it is exercised for ever; not only in the adorable Person of the Son of God, but in that priestly tribe of which He is the Head, ‘a chosen generation, a kingly priesthood’ (1 Pt. 2:9), wherein all are priests, although in different degrees, and all are called to concelebrate with the supreme Pontiff (p. 409).

A temple, a sanctuary, an altar, a victim, the very presence of the living and true God – all these are not sufficient for liturgical worship; there must moreover be a pontiff. Now man is truly a priest, truly a pontiff in the august function which is celebrated in the sanctuary of his own soul: ‘Thou hast made us to our God a kingdom and priests’ (Apoc. 5:10). Every baptised Christian is priest and king in the secret temple of his own soul, although he is but a single living stone of the edifice built by the hand of God, of which edifice our Lord Jesus Christ is the corner-stone. Such, in his first epistle, is the teaching of the Prince of the Apostles: ‘Be you also as living stones built up, a spiritual house, a holy priesthood, to offer up spiritual sacrifices acceptable to God by Jesus Christ’ (1 Pt. 2:5).

But to realise all the perfection of this priesthood, man must, freely and voluntarily, offer his sacrifice, after the example of the eternal Pontiff whom we hear insisting on the absolutely free character of His oblation: ‘No man taketh my life away from Me; but I lay it down of Myself, and I have power to lay it down, and I have power to take it up again’ (Jn. 10:18). This liberty, which shows him truly to be a priest, was understood by Isaias, when he said: ‘He was offered because it was His own will’ (Is. 53:7) (‘The Spiritual Life and Prayer’, p. 423-424).

“In order to live in one single act of perfect Love, I OFFER MYSELF AS A VICTIM OF HOLOCAUST TO YOUR MERCIFUL LOVE, asking You to consume me incessantly…”
– From St. Therese’s Act of Oblation to Merciful Love