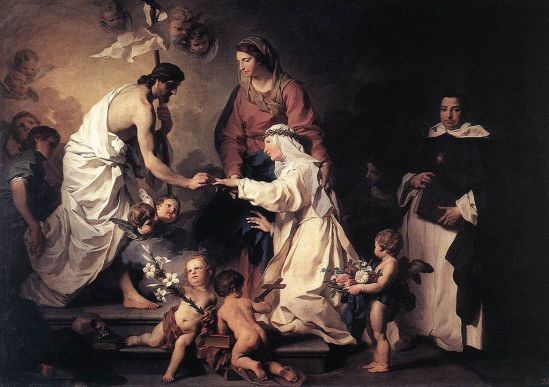 SOME REVELATIONS ON THE HOLY SACRIFICE OF THE MASS AND THE MOST BLESSED SACRAMENT (cont.)

(5) A Revelation to Mother Jeanne Deleloë* (d. 1660)
“At Christmastide,” she writes, “during all those solemnities of our Saviour’s Birth, I received great favours; His Majesty often gave me a vivid light so that I knew these divine mysteries as if they were then really taking place.” (‘Christ, the Ideal of the Monk,’ Bl. Columba Marmion)

*“Often, during her ecstasies, she was heard reciting the Divine Office; but a curious thing was that she pronounced the verses alternatively, as if the inhabitants of Heaven were repeating the psalms with her; she recited the whole without omitting a single syllable, whatever was the Office of the day…
We likewise see St. Catherine of Siena asking Our Lord to teach her to read in order to be able to chant the Psalms and praises of God during the Canonical Hours. Often, too, Our Lord walked up and down with her in her cell and recited the Office with the Saint. It was as two religious might have done.” (ibid.)

(6) A Vision of St. Mary Magdalene de Pazzi
“God also granted her to see Jesus in the heart of the sisters after they had received Holy Communion; and sometimes she manifested in what form she saw Him in each of them,
He showing Himself to her in some as a child, in others at the age of twelve, and in others still at the age of thirty-three years, in others as suffering and crucified, and in others as risen and glorious; and this diversity occurred according to the various meditations the sisters were engaged in, or according to the capacity and the merits of each of them.” (‘The Life of St. Mary Magdalen De-Pazzi,’ Fabrini) 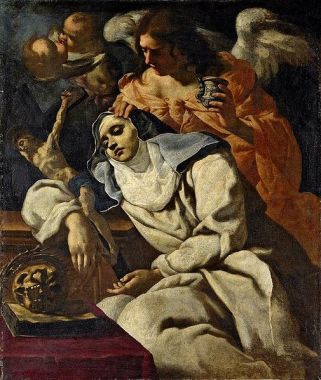 (7) Another Vision of St. Mary Magdalene de Pazzi
“One morning, it being Easter Sunday, whilst she was mistress of novices, and sitting at the table with unwonted joy and gladness, a novice waitress could not keep herself from asking her the cause of so great a joy. To whom Magdalen made answer: “Because I see Jesus resting in the breast of all the sisters, glorious and risen, as Holy Church to-day represents Him to us; and His presence is the cause of my being so joyful.” (ibid.)